4 November and lots of updates this morning that were not there yesterday!

Looks like a selection of powertrain updates (PCM, BECM, SOBDM, SOBDMB, SOBDMC) and the ABS system and generic function #2 which I think may be the tailgate module but I'll have to double check on that.

So if you are doing these yourself you'd start with the PCM, and then the rest of the powertrain items would chain in sequence. Then the others in this list can be knocked off in any order. 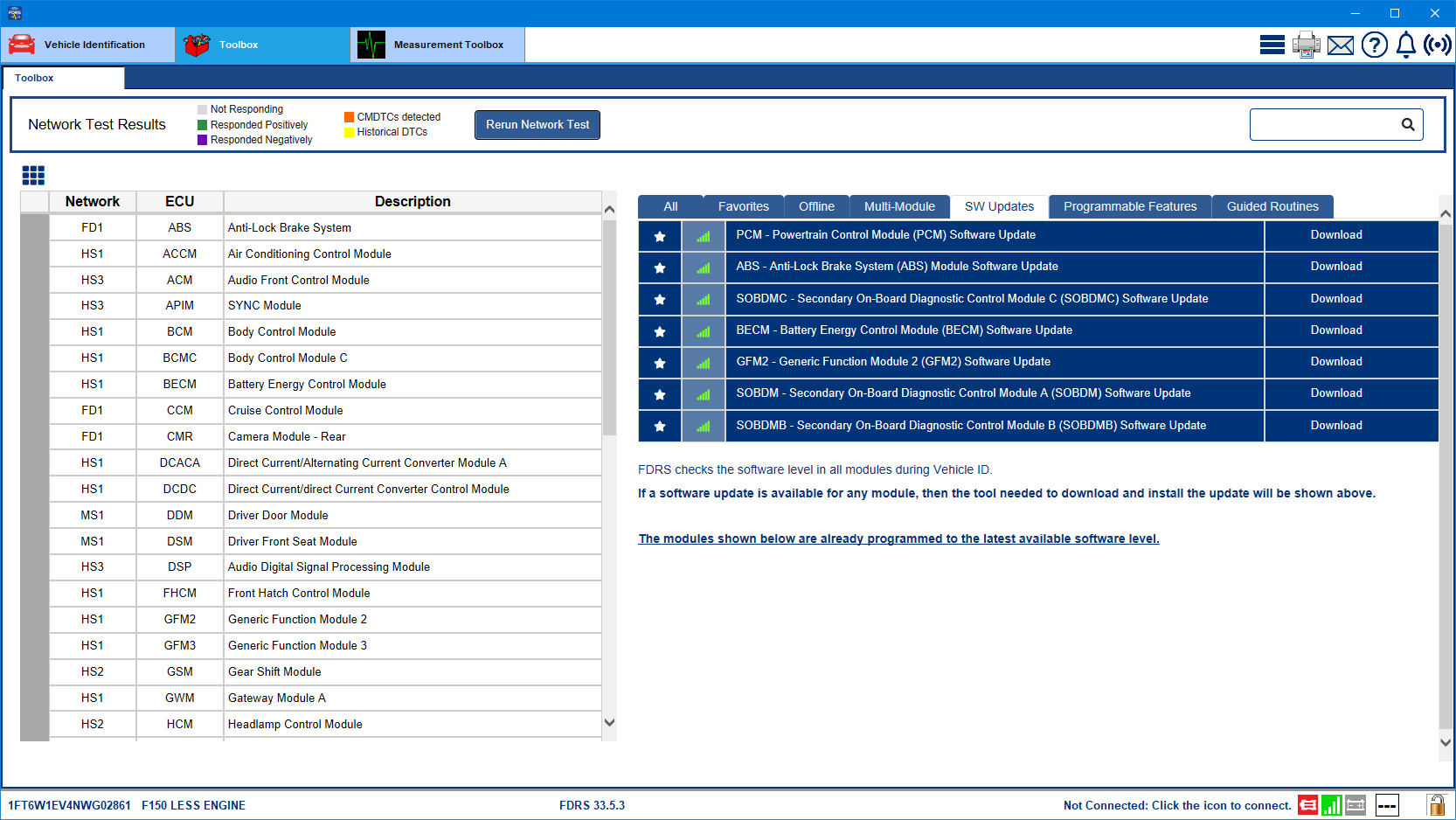 EDIT: All done and it was interesting. Above, I said to start with the PCM and it would chain all the rest of the powertrain items in sequence. Well here's how it went; I setup the powersupply and laptop and initially picked the PCM, no problem, very straightforward. What surprised me was that the ABS was next, I guess I had forgotten that the ABS is a powertrain module as well. So after the ABS was the SOBDMB, SOBDMC, SOBDM, BECM, and then this last one threw me and I wasn't expecting it, but the GFM2 was chained right along with the rest. So everything in today's list were all what Ford refers to as 'coordinated' updates that once you select one in the list you'll get a message like this one: 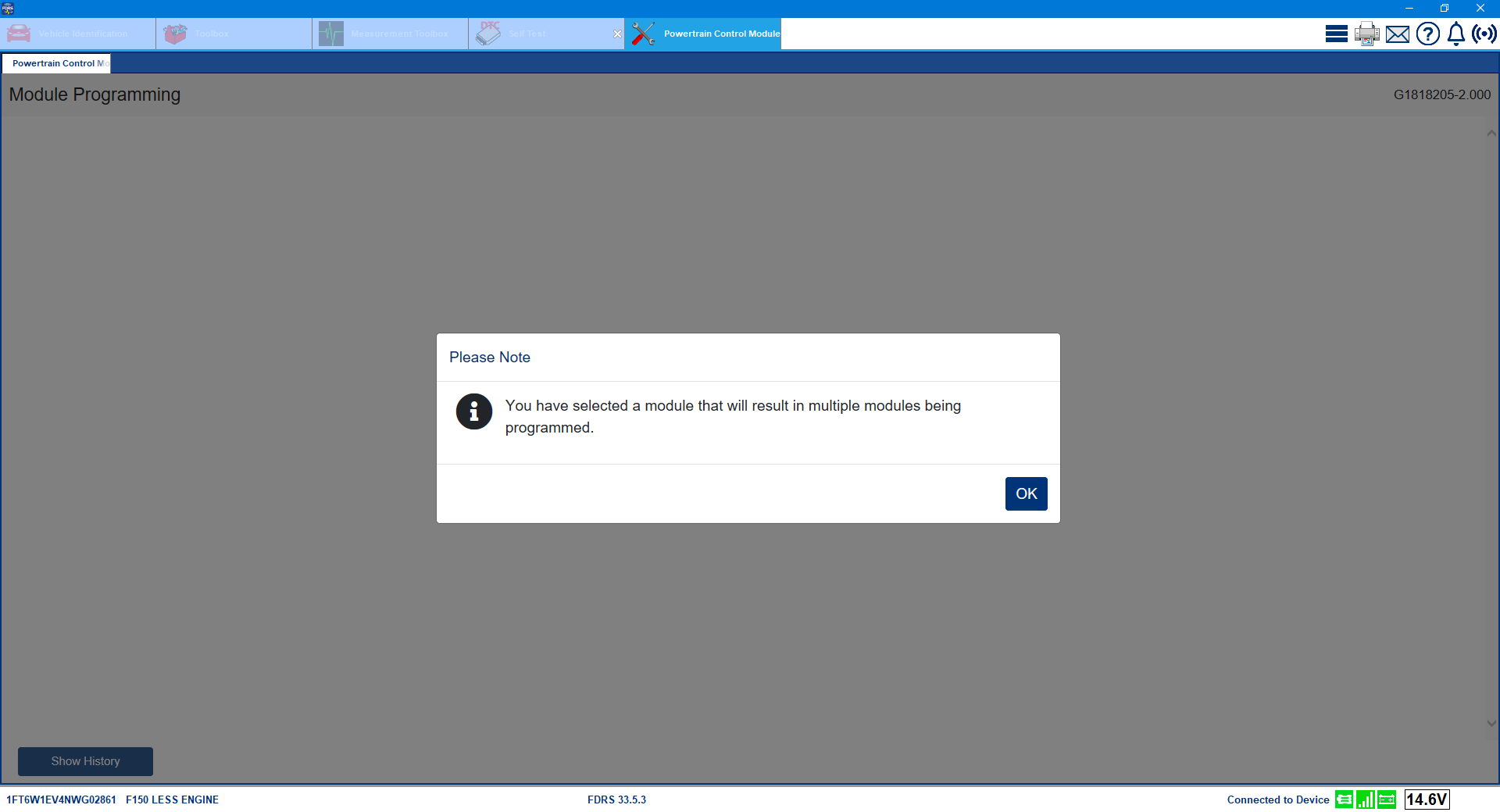 And then all you do is turn on and off the "Start" button on the dash and select "OK" on the laptop when it's time....and it steps you through everything in sequence.

Total time on the FDRS laptop from the very first vehicle 'network scan' to the final logoff was 28 minutes.

Stay safe and have a great weekend!

So for those of us who are doing their own updates, but only buy the two-day license when needed....before you have another go be sure to update your FDRS software, a new update came out late last night (16 Nov 22). 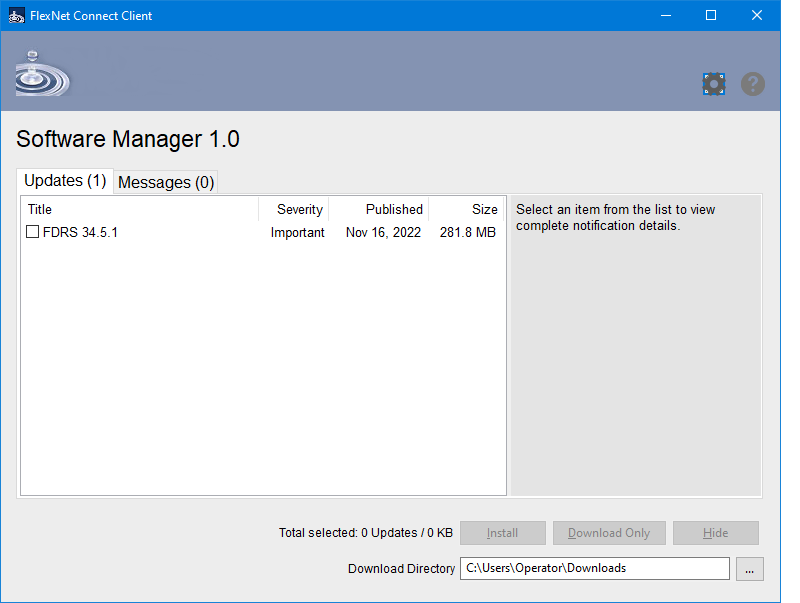 22 Nov 22 and a surprise APIM update showed up this afternoon. No idea what it will change or enable...but my truck today did not indicate that it had a pending PowerUp 3.5.5 like many other folks were talking about yesterday and today.

I'll do the update tomorrow and see if I can figure out what changed. 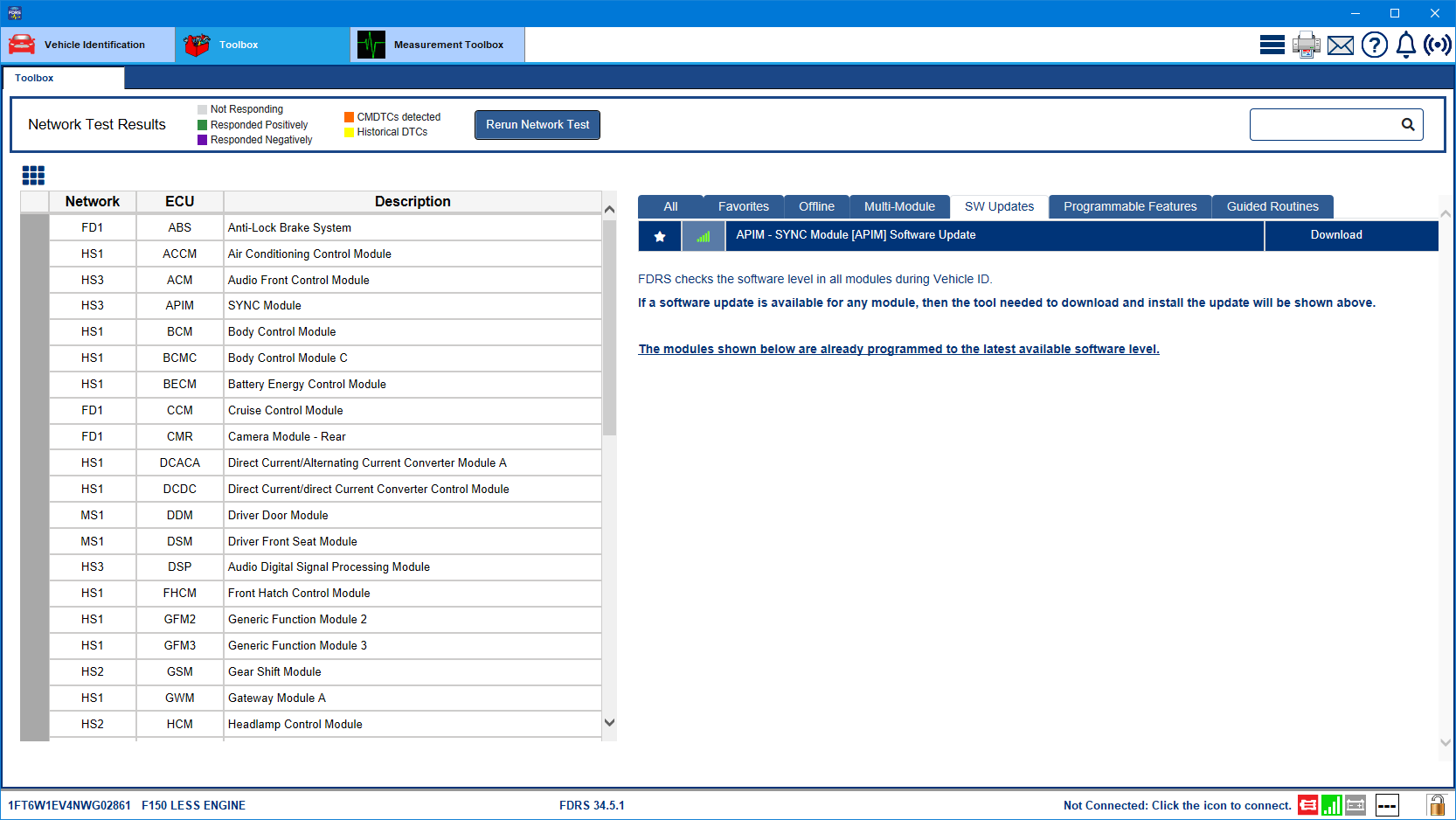 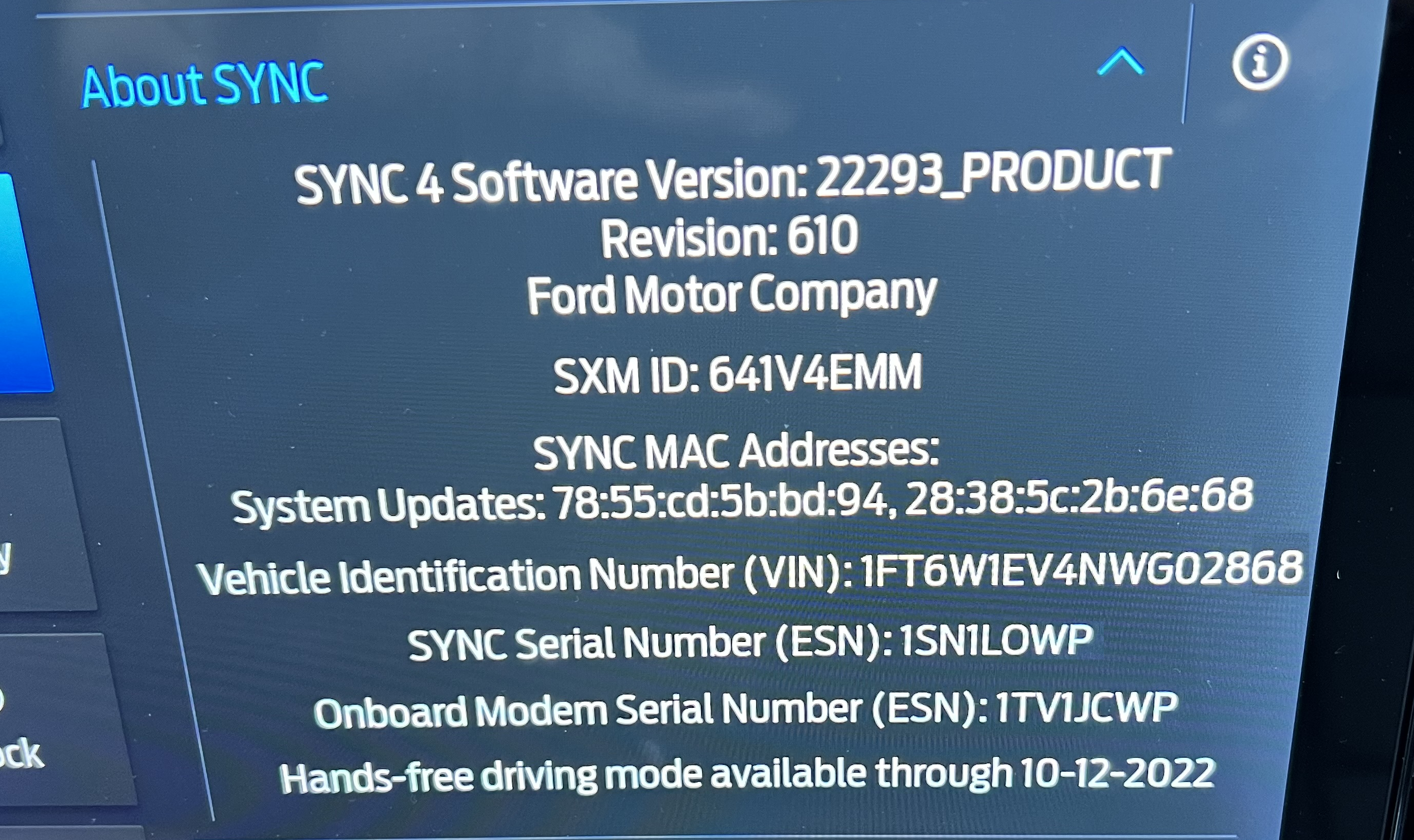 The update was pretty uneventful except for a notice that one file failed to download and did I want a retry...to which I said "yes" and then it all went to plan.

For those doing this at home the "F188" DID value, which normally is the identifier for a revision, did not change...it's still the "-DT" revision from a couple of months ago that added the dual phone connectivity....but other packages in the update did change and as a result the Sync version went from 539 to 610.

I have no idea what the changes are since I haven't had time to thoroughly explore yet (other things to do this morning).

I definitely did notice while programming this morning that there's a difference in the seat heater controls versus my Mach-E. The Mach-E (I only recently noticed this) has an "Auto" mode for the seat heaters which reduces the output as the cabin gets warmer. You select the seat heater and then the "Auto" setting and it does it's thing.

The Lightning does not have this...instead it's like my previous F-150(s) where you just select low, med, hi...and that's it.

Also, if doing this at home you may get mixed messages like I did when following the instructions after the USB drive has downloaded the update to the truck's USB port.

The Sync screen says this: 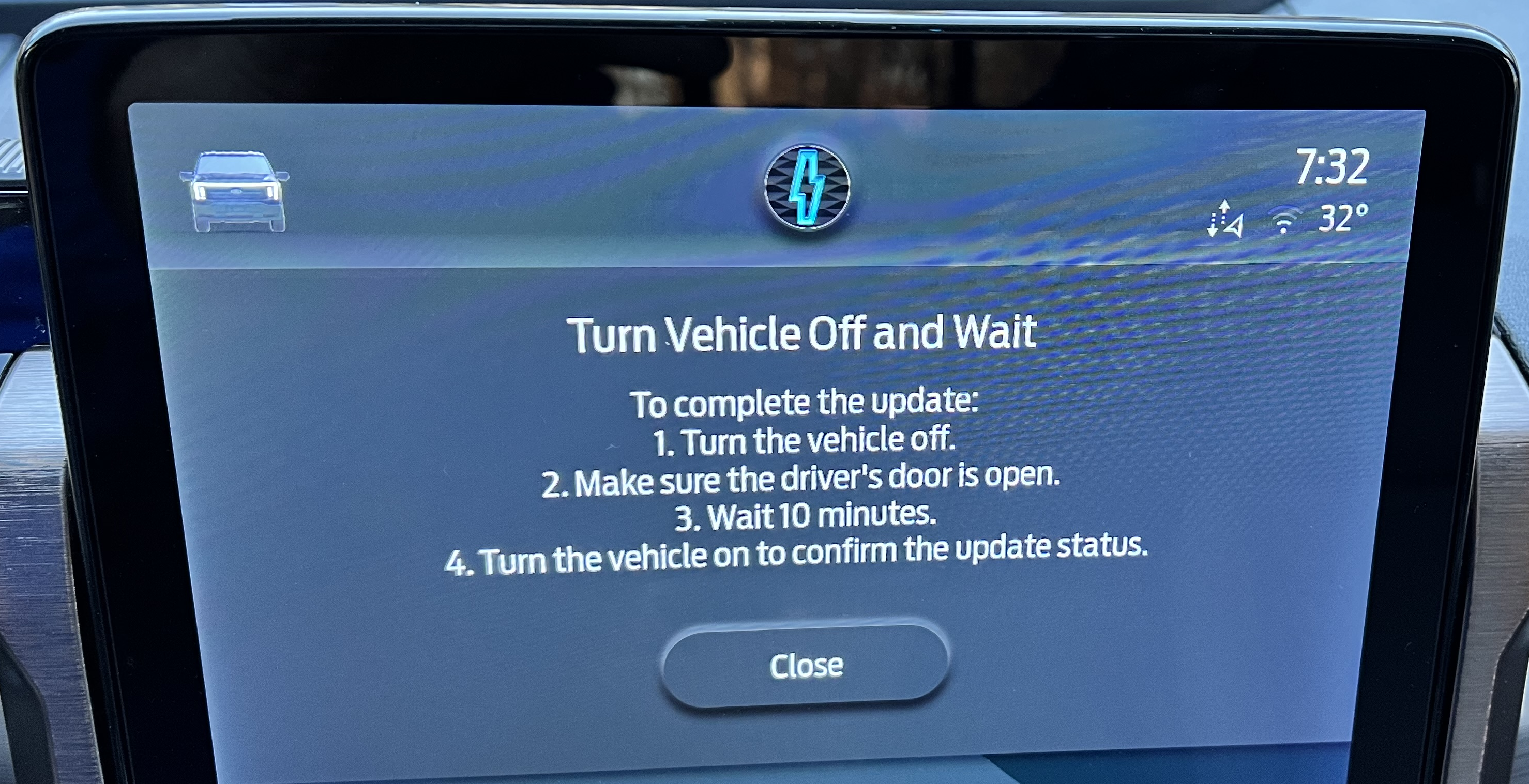 But the FDRS onscreen instructions say to wait 5 minutes instead and nothing about leaving the door open: 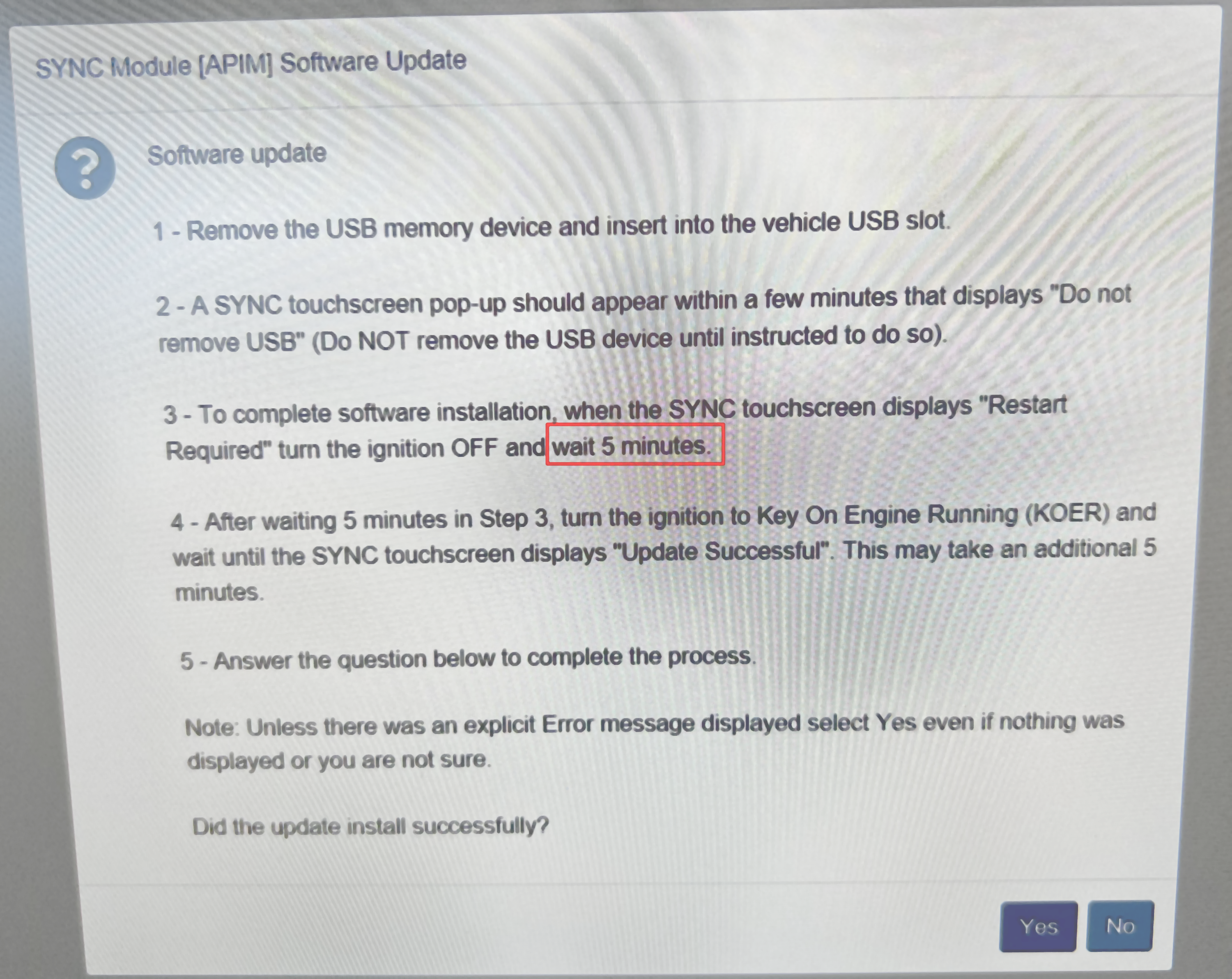 I played it safe and followed the Sync screen instructions for 10 minutes with the driver's door open.

Just so you know...you will run into small things like this from time to time while doing updates....
OP
OP

Oh and I thought I'd add that this APIM update did not enable video streaming (YouTube and selected other content) like my Mach-E has. It may take a future TCU update for that to happen.

Mike G said:
Oh and I thought I'd add that this APIM update did not enable video streaming (YouTube and selected other content) like my Mach-E has. It may take a future TCU update for that to happen.
Click to expand...

Any other noticeable changes with that APIM update?
OP
OP

ResidualJinx said:
Any other noticeable changes with that APIM update?
Click to expand...

I haven't noticed anything at all really.
OP
OP

Mike G said:
I haven't noticed anything at all really.
Click to expand...

This is a followup that's really a question...am I the only one who has Sync 610 right now?

So nobody else has this update and can say what the changes are (if any)?

Seems odd that there was an APIM update and nobody knows what the differences are between that and the previous version 539.

I'll go out this morning and go through all the menus again.

I must have missed something.